Binance on Monday halted withdrawals of bitcoin for several hours after crypto lender Celsius also blocked customers from pulling funds from its platform, citing “extreme market conditions”, while digital assets slumped in price. Bitcoin, ether and other major tokens have wobbled in recent weeks while inflation has surged and major central banks have signalled they will cut back stimulus hard. But they dropped sharply again on Monday on growing signs that the infrastructure underpinning the digital asset market is creaking under the strain. Binance blamed a “stuck transaction” for its suspension. Bitcoin, the world’s most actively traded cryptocurrency, has dropped almost 20 per cent since Friday to below $24,000, its lowest level since December 2020, according to CryptoCompare data. Meanwhile, the value of the broader crypto market has fallen from a peak of $3.2tn in November to around $1tn on Monday. Celsius is one of the biggest players in the market for digital yield products, providing users with the ability to lend out their tokens as collateral for other crypto projects. In return for lending their tokens, traders were able to earn annual yields of as much as 17 per cent. 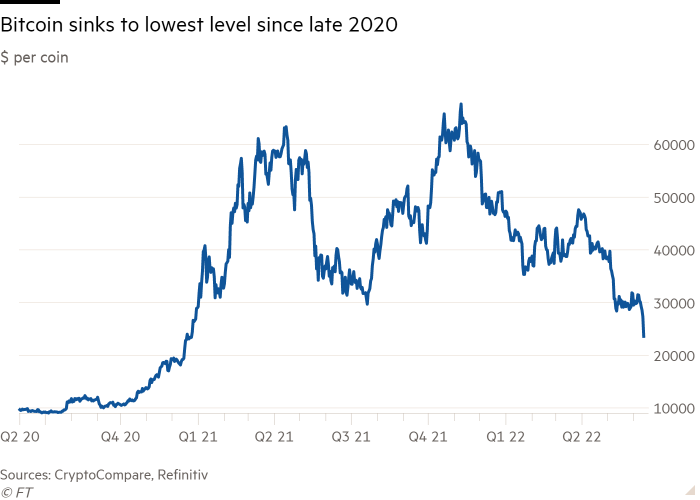 Sentiment towards these high-risk projects cooled sharply after the terra and luna tokens — which were the foundation of another popular yield platform — last month collapsed in a matter of days. The value of assets deposited on Celsius’s platform shrivelled to less than $12bn as of May 17 from more than $24bn in late December. Ether, which is considered a proxy for sentiment for digital asset projects that offer investors high yields, has dropped almost 30 per cent since Friday, leaving it down two-thirds in dollar terms this year to trade at $1,195. Selling on Monday also ricocheted into the shares of crypto-focused companies. MicroStrategy, a tech company that invests heavily in bitcoin, lost a quarter of its value in early trade on Wall Street while Nasdaq-listed crypto exchange Coinbase fell 16 per cent.

Celsius last year raised $400mn in an equity funding round led by Caisse de dépôt et placement du Québec, Canada’s second-largest pension fund, and WestCap, the fund set up by former Airbnb and Blackstone executive Laurence Tosi. CDPQ and WestCap did not immediately respond to a request for comment on their investment. That fundraising came even as US regulators indicated they were scrutinising the industry. State authorities in Texas and New Jersey have alleged that Celsius’s yield-bearing accounts amount to an unregistered securities offering. Celsius’s halt to withdrawals early on Monday was also a U-turn after it had spent several days rebutting accusations that customers could not make withdrawals. Chief executive Alex Mashinsky challenged critics at the weekend to find “even one person who has a problem withdrawing”.

Celsius, which has offices in the US, UK and Lithuania, said the redemption freeze was done for the “benefit of our entire community in order to stabilise liquidity and operations while we take steps to preserve and protect assets”. The group’s own coin, known by the ticker CEL, has lost half its value in the past 24 hours, according to CryptoCompare data.