The costs of the ECB doing nothing would be considerable, but the action it takes must be carefully calibrated

To many seasoned observers of monetary policy, the following two statements are contradictory. The eurozone faces a considerable threat of recession later this year. Even so, the European Central Bank should withdraw monetary support from the eurozone economy and raise interest rates. For years it has been the correct response for European central bankers to support spending in difficult times with looser monetary policy and to do everything possible to avoid a recession. After all, the ECB won acceptance as a powerful and respected institution only when the central bank, led by then president Mario Draghi, pledged to do “whatever it takes” to boost the continent’s economy almost exactly a decade ago. The promise of unlimited monetary firepower quickly ended the eurozone crisis. In 2022, the circumstances are not remotely similar to 2012 and policy needs to adapt accordingly. Ten years ago, Europe was engaged in an austerity drive to improve public finances, unemployment across the bloc was over 10 per cent and rising, inflation was only a little over 2 per cent and falling. That was an economy that needed stimulus. Today, unemployment across the eurozone fell to 6.8 per cent in March and April, its lowest level since the creation of the single currency in 1999, while inflation rose to 8.1 per cent in May. In place of austerity, European nations are planning their spending under the €800bn recovery fund. 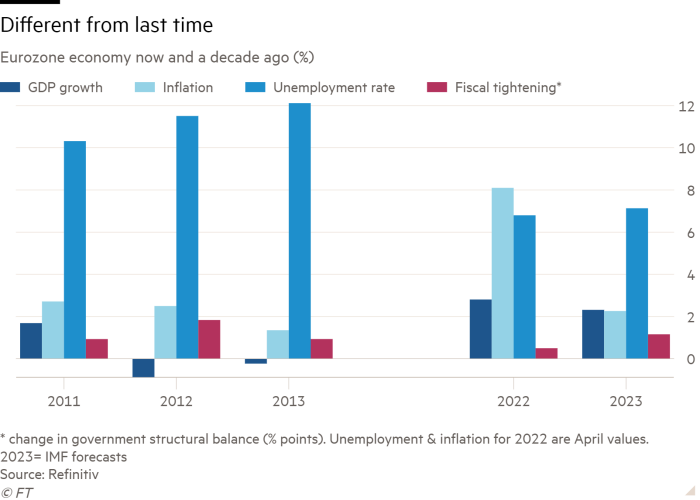 Although the similarities with a decade ago are few, this is still not enough to make the case for tighter monetary policy that the ECB is likely to advance at its meeting on Thursday. For that we need to look more closely at the forces affecting supply and demand in the eurozone economy and the risks surrounding different policy actions. Growth has slowed considerably since the strong recovery from coronavirus last summer. Gross domestic product across the eurozone rose only 0.3 per cent in the final quarter of 2021 and 0.2 per cent in the first quarter of 2022, which coincided with Russia’s invasion of Ukraine. In the quarters ahead, demand will be boosted by the removal of most Covid-19 restrictions this summer, especially for the providers of consumer-facing services, but it will be held back by the cost-of-living squeeze of higher energy prices on consumer incomes.

But whether growth rates remain anaemic or turn negative, the brutal truth is that Europe needs to spend less on other things because, as a net energy importer, the surge in the cost of oil and gas has made everyone poorer. If there is no recognition of this, demand will continue to exceed supply and turn a temporary rise, predominantly in energy prices, into more problematic and persistent general inflation. This would happen with weak growth rates, similar to those of recent quarters, or even in a shallow recession. The ECB estimates the effective tax on consumers of higher gas, electricity and petrol prices amounts to 1.3 per cent of national income. That, at a minimum, is the hit everyone has to take. While in 2011, the central bank erred because it expected energy and food price inflation to persist at a time of economic depression, the more relevant policy error for today’s circumstances occurred in the 1970s.

Then, the countries that rapidly killed inflationary impulses with tight policy, led by the West German Bundesbank, took the pain and suffered a short and shallow downturn. Price rises were temporary and did not become ingrained into daily life. Those that followed a more accommodating path — Italy and France — ended up with persistently higher inflation rates that required much deeper recessions in the early 1980s to stamp out inflation. This is therefore the moment to take early action to prevent the foothills of an inflation problem turning into a mountain. There are signs that price rises are becoming broader across goods and services in Europe. In April, three-quarters of all individual goods and services saw prices more than 2 per cent higher than a year earlier, showing companies are increasingly willing to raise prices rather than take a squeeze in their margins. Long-term inflation expectations have risen sharply in financial markets and are no longer languishing below the ECB’s 2 per cent target.

With inflation at 8 per cent and the ECB’s policy interest rate still negative at minus 0.5 per cent, the real rate of interest is extraordinarily low even with the tighter policy flagged by the central bank. The ECB is right to signal it will raise interest rates in July and then take them out of negative territory by September. The economic situation is ugly. But the risks would be greater if the central bank did nothing. A faltering eurozone economy can be boosted again by looser policy if the downturn proves deeper than required to keep inflation in check. In contrast, the costs of dealing with a loss of confidence in the authorities’ ability to control prices would be considerable. The months ahead will be miserable for European economies. Incomes will be squeezed, a recession is quite likely and interest rates need to rise, adding to pressures on households and families. It will be difficult. But that is the adjustment that every European economy needs to make as we wean ourselves off cheap, but ultimately dangerous, Russian energy.