Big variations in the share of revenues from securities lending retained by asset managers raise questions over whether fund investors are being overcharged, according to the EU’s top financial watchdog. Securities lending — the practice among institutional investors of temporarily swapping stocks, bonds and exchange traded funds with each other in return for a fee — is a highly lucrative business which generated global revenues of almost $11bn in 2021, according to IHS Markit, a data provider. Hedge funds borrow stocks and bonds in order to bet that an asset will fall in value — the process known as “short selling” — but market makers are also active participants in securities lending markets as they frequently borrow assets to facilitate the completion of clients’ trades. Most regulators across Europe take the view that all revenues arising from securities lending transactions, net of costs, should be returned to fund investors. But many fund managers return only half to two-thirds of the gross revenues generated by securities lending activities to investors, said the European Securities and Markets Authority (Esma) in a report published at the end of last month. Other managers return 90 per cent of the gross revenues to investors.

These divergences raise the risk that investors are “effectively being overcharged,” said Esma. The growth of index trackers and exchange traded funds over the past decade has provided ETF managers with an enormous inventory of lendable assets, helping them to become some of the most influential players in the securities lending market. Some large asset managers, most notably BlackRock, operate “in-house” lending arms whereas others, such as Vanguard, employ specialist third-party agents to carry out securities lending activities. 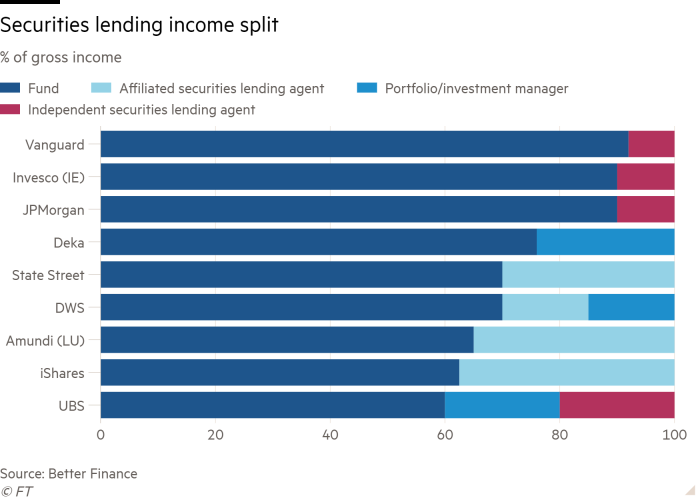 BlackRock’s in-house lending agent retains 37.5 per cent of the gross revenues from securities lending transactions in Europe whereas Vanguard pays about 8 per cent of gross lending revenues to its third-party agent, according to Better Finance, a Brussels-based investor rights group. Other managers including Amundi, DWS and State Street Global Advisors that use in-house or affiliated lending agents also return significantly less of their gross securities lending revenues to their investors than Vanguard. Fund managers that use in-house lending arms have discretion in how they calculate the operating costs of these units, leading to the wide divergence in the share of securities lending revenues they retain, rather than passing on to fund investors. Esma said it was concerned that the fixed fee split arrangements by managers operating in-house lending agents were not adjusted on a regular basis even though competitors could offer the same services more cheaply to fund investors.

Better Finance said the high operational costs of in-house lending agents suggested some managers were earning “hidden revenues” from their securities lending operations. “Such practices could constitute a breach of a fund manager’s duty of care to retail investors,” said Guillaume Prache, managing director of Better Finance. It has proposed that the maximum share of gross securities lending revenues that managers, such as BlackRock, can deduct for an in-house lending agent should be limited to just 10 per cent. BlackRock declined to comment. In addition, the current Esma guidelines covering securities lending revenues should be upgraded into enforceable rules to ensure a level playing field for investors across Europe, said Better Finance.