Even as more costly fuel poses political risks for President Biden, oil companies and OPEC are not eager to produce more because they worry prices will drop.

HOUSTON — Americans are spending a dollar more for a gallon of gasoline than they were a year ago. Natural gas prices have shot up more than 150 percent over the same time, threatening to raise prices of food, chemicals, plastic goods and heat this winter.

The energy system is suddenly in crisis around the world as the cost of oil, natural gas and coal has climbed rapidly in recent months. In China, Britain and elsewhere, fuel shortages and panic buying have led to blackouts and long lines at filling stations.

The situation in the United States is not quite as dire, but oil and gasoline prices are high enough that President Biden has been calling on foreign producers to crank up supply. He is doing so as he simultaneously pushes Congress to address climate change by moving the country away from fossil fuels toward renewable energy and electric cars.

U.S. energy executives and the Wall Street bankers and investors who finance them are not doing anything to bolster production to levels that could bring down prices. The main U.S. oil price jumped nearly 3 percent on Monday, to about $78 a barrel, a seven-year high, after OPEC and its allies on Monday declined to significantly increase supply.

Producers are still chafing at memories of the price crash early in the pandemic. Wall Street is even less enthusiastic. Not only have banks and investors lost money in the boom-bust cycles that whipsawed the sector over the past decade, but many also say they are prepared to pare their exposure to fossil fuels to meet the commitments they have made to fight climate change.

“Everyone is very wary since it was just 15 or 16 months ago we had negative-$30-a-barrel oil prices,” said Kirk Edwards, president of Latigo Petroleum, which has interests in 2,000 oil and natural gas wells in Texas and Oklahoma. He was recalling a time of so little demand and storage capacity that some traders paid buyers to take oil off their hands.

If the drillers don’t increase production, fuel prices could stay high and even rise. That would present a political problem for Mr. Biden. Many Americans, especially lower-income families, are vulnerable to big swings in oil and gas prices. And while use of renewable energy and electric cars is growing, it remains too small to meaningfully offset the pain of higher gasoline and natural gas prices.

Goldman Sachs analysts say energy supplies could further tighten, potentially raising oil prices by $10 before the end of the year.

That helps explain why the Biden administration has been pressing the Organization of the Petroleum Exporting Countries to produce more oil. “We continue to speak to international partners, including OPEC, on the importance of competitive markets and setting prices and doing more to support the recovery,” Jen Psaki, Mr. Biden’s press secretary, said last week.

But OPEC and its allies on Monday merely reconfirmed existing plans for a modest rise in November. They are reluctant to produce more for the same reasons that many U.S. oil and gas companies are unwilling to do so.

Oil executives contend that while prices may seem high, there is no guarantee that they will stay elevated, especially if the global economy weakens because coronavirus cases begin to increase again. Since the pandemic began, the oil industry has laid off tens of thousands of workers, and dozens of companies have gone bankrupt or loaded up on debt.

Oil prices may seem high relative to 2020, but they are not stratospheric, executives said. Prices were in the same territory in the middle of 2018 and are still some ways from the $100-a-barrel level they topped as recently as 2014.

Largely because of the industry’s caution, the nationwide count of rigs producing oil is 528, roughly half its 2019 peak. Still, aside from recent interruptions in Gulf of Mexico production from Hurricane Ida, U.S. oil output has nearly recovered to prepandemic days as companies pull crude out of wells they drilled years ago.

Another reason for the pullback from drilling is that banks and investors are reluctant to put more money into the oil and gas business. The flow of capital from Wall Street has slowed to a trickle after a decade in which investors poured over $1.4 trillion into North American oil and gas producers through stock and bond issues and loans, according to the research firm Dealogic.

“The banks have pulled away from financing,” said Scott Sheffield, chief executive of Pioneer Natural Resources, a major Texas oil and gas producer.

The flow of money supplied by banks and other investors had slowed even before the pandemic because shale wells often produced a lot of oil and gas at first but were quickly depleted. Many oil producers generated little if any profit, which led to bankruptcies whenever energy prices fell.
Companies constantly sold stock or borrowed money to drill new wells. Pioneer, for example, did not generate cash as a business between 2008 and 2020. Instead, it used up $3.8 billion running its operations and making capital investments, according to the company’s financial statements.

Industry executives have come to preach financial conservatism and tell shareholders they’re going to raise dividends and buy back more stock, not borrow for big expansions. Mr. Sheffield said Pioneer now intended to return 80 percent of its free cash flow, a measure of money generated from operations, to shareholders. “The model has totally changed,” he said. 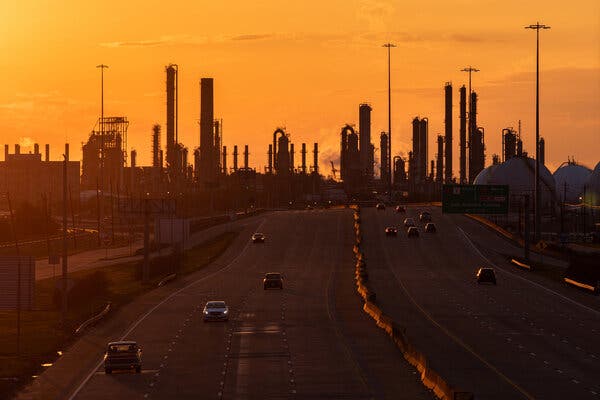 Oil company shares, after years of declines, have soared this year. Still, investors remain reluctant to finance a big expansion in production.

With oil and gas exploration and production businesses taking a cautious approach and returning money to shareholders, the first company “that deviates from that strategy will be vilified by public investors,” said Ben Dell, managing director of Kimmeridge, an energy-focused private equity firm. “No one is going down that path soon.”

This aversion to expanding oil and gas production is driven in part by investors’ growing enthusiasm for renewable energy. Stock funds focusing on investments like wind and solar energy manage $1.3 trillion in assets, a 40 percent increase this year, according to RBC Capital.

And the biggest investment firms are demanding that companies cut emissions from their operations and products, which is much harder for oil and gas companies than for technology companies or other service-sector businesses.
BlackRock, the world’s largest asset manager, wants the businesses it invests in to eventually remove as much carbon dioxide from the environment as they emit, reaching what is known as net-zero emissions. The New York State Common Retirement Fund, which manages the pension funds of state and local government workers, has said it will stop investing in companies that aren’t taking sufficient steps to reduce carbon emissions.

But even some investors pushing for emissions reductions express concern that the transition from fossil fuels could drive up energy prices too much too quickly.

Mr. Dell said limited supply of oil and natural gas and the cost of investing in renewable energy — and battery storage for when the sun is not shining and the wind is not blowing — could raise energy prices for the foreseeable future. “I am a believer that you’re going to see a period of inflating energy prices this decade,” he said.

Laurence D. Fink, chairman and chief executive of BlackRock, said this could undermine political support for moving away from fossil fuels.

“We risk a supply crisis that drives up costs for consumers — especially those who can least afford it — and risks making the transition politically untenable,” he said in a speech in July.

There are already signs of stress around the world. Europe and Asia are running low on natural gas, causing prices to rise even before the first winter chill. Russia, a major gas supplier to both regions, has provided less gas than its customers expected, making it hard for some countries to replace nuclear and coal power plants with ones running on gas.

OPEC, Russia and others have been careful not to raise oil production for fear that prices could fall if they flood the market. Saudi Arabia, the United Arab Emirates, Russia and a few other producers have roughly eight million barrels of spare capacity.

Helima Croft, head of global commodity strategy at RBC Capital Markets, said she expected that OPEC and Russia would be willing to raise production if they saw the balance between supply and demand “tighten from here.”

If OPEC raises production, U.S. producers like Mr. Edwards of Latigo Petroleum will be even more reluctant to drill. So far, he has stuck to the investment plans he made at the beginning of the year to drill just eight new wells over the last eight months.

“Just because prices have jumped for a month or two doesn’t mean there will be a stampede of drilling rigs,” he said. “The industry always goes up and down.”